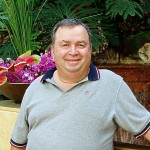 One of the founders of Central Academy, Gordon ‘Gordy’ Burstein passed away on January 1, 2015. He was a driving force behind the Academy through his vision, boldness, tenacity and love.  He helped lead the Academy until his retirement in 2000.

Gordon Burstein, beloved husband, father and grandfather, passed away peacefully January 1, 2015 at the Mayo Clinic in Phoenix, Arizona. He is survived by his wife, Robin; daughter, Kim; son-in-law, Eric; and granddaughters, Zoe and Lena.Gordy was born on October 23, 1942 in Elgin, Illinois. A graduate of Drake University, Gordy met Robin, his wife of forty-nine years, as undergraduates and spent the next thirty-six years in Des Moines before retiring to the Phoenix area. Gordy was a life-long teacher in Des Moines and introduced countless students to American history and a love of learning over his teaching career. Since retirement, Gordy spent the years traveling throughout the US with Robin and spending time with his treasured family, friends, and beloved Labradoodle, Alfie.

A service will be held 2 p.m. Monday, January 5 at Tifereth Israel Synagogue. Memorial donations may be made in Gordy’s name to Central Academy via centralacademyalumninetwork.org, or via mail through the Central Academy Alumni Network Fund (Community Foundation of Greater Des Moines, 1915 Grand Avenue, Des Moines IA 50309). – See more at: http://www.ilesfuneralhomes.com/obituary/Gordon-Burstein/Surprise-AZ/1466957#sthash.aIyPyUma.dpuf