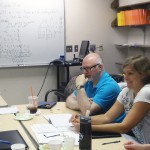 CA math teachers Lana Lyddon-Hatten, Michael Link, and Brian Reece were three of eight teachers invited to participate in the Holl Mathematical Discovery for Teachers Workshop this summer.  “It was a joy working with these teachers.  Outstanding teachers like these are what every parent wants for his or her child,” said Dr. Leslie Hogben, Dio Lewis Holl Chair in Applied Mathematics and Professor of Mathematics at Iowa State University.

The workshop focused on a mathematical discovery process, including numerical experiments to gather data, observing patterns in the data, making conjectures, and proving (or disproving) the conjectures.  Implementation of these ideas with students was also discussed.  The participants learned the free mathematical software Sage and used it to gather data.

The workshop was structured around two mathematical problems, presented by Dr. Hogben and Dr. Ulrica Wilson, Associate Professor of Mathematics at Morehouse College.  The workshop divided into two research groups to explore the problems.

One problem involved mathematical analysis of the Lights Out! game, which was sold as a handheld electronic game in the 1990s and can be played online, e.g., http://www.neok12.com/games/lights-out/lights-out.htm.  There is a 5 x 5 grid of lights, each of which can be either on or off.  Each light is also a button, and when you press a button you change (turn on to off, and off to on) that light and each of its neighbors (above, below, left, right) that exist. The goal is to turn all the lights off.   This game can be analyzed using matrices, which are rectangular arrays of numbers, and arithmetic mod 2 (in mod 2, 1+1= 0, as well as the more usual 0 + 1 = 1 = 1+0 and 0 + 0 = 0).  Variations including different size grids were explored.

The other problem involved iterating (repeatedly applying) a particular function to see if the number does not change (i.e., is a fixed point), goes to a fixed point, or some other behavior.  The particular function looked at initially was to square each digit and then take the sum.  For example, 1 is a fixed point (because 12 = 1) and 13 goes to 1 (because 12 + 32 = 10, and 12 + 02 = 1).  Variations including summing cubes and other powers of the digits were explored.

On Friday each group presented its results to the other group. The iteration group found a bound for each power (such as square or cube), so that if you check all numbers below the bound you know you have found all fixed points for that power, proved the bound worked, and found all fixed points for several powers. In addition to mathematical results, the Lights Out! group developed a model for the lights/buttons using two-colored disks; this made it possible to experiment concretely with various arrangements of lights and made the problem more accessible to students.

Dr. Heather Bolles of Iowa State University helped with the development of the workshop and also participated in some sessions.  Dr. Travis Peters of Culver-Stockton College, MO, who teaches future teachers, also participated.

All expenses for participating teachers were paid by funds from the Dio Lewis Holl Chair, which honors D. L. Holl, Head of the Department of Mathematics at Iowa State University from 1945 until his death in 1954.