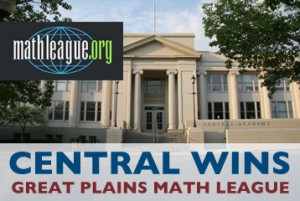 Central Academy math students earned 1st place in the Great Plains Math League contest held in Cedar Rapids on Thursday, October 3.  Twenty-nine of Central’s thirty-nine participants qualified for the state math championships to be held in April by virtue of their scores at this event.  Those students are: